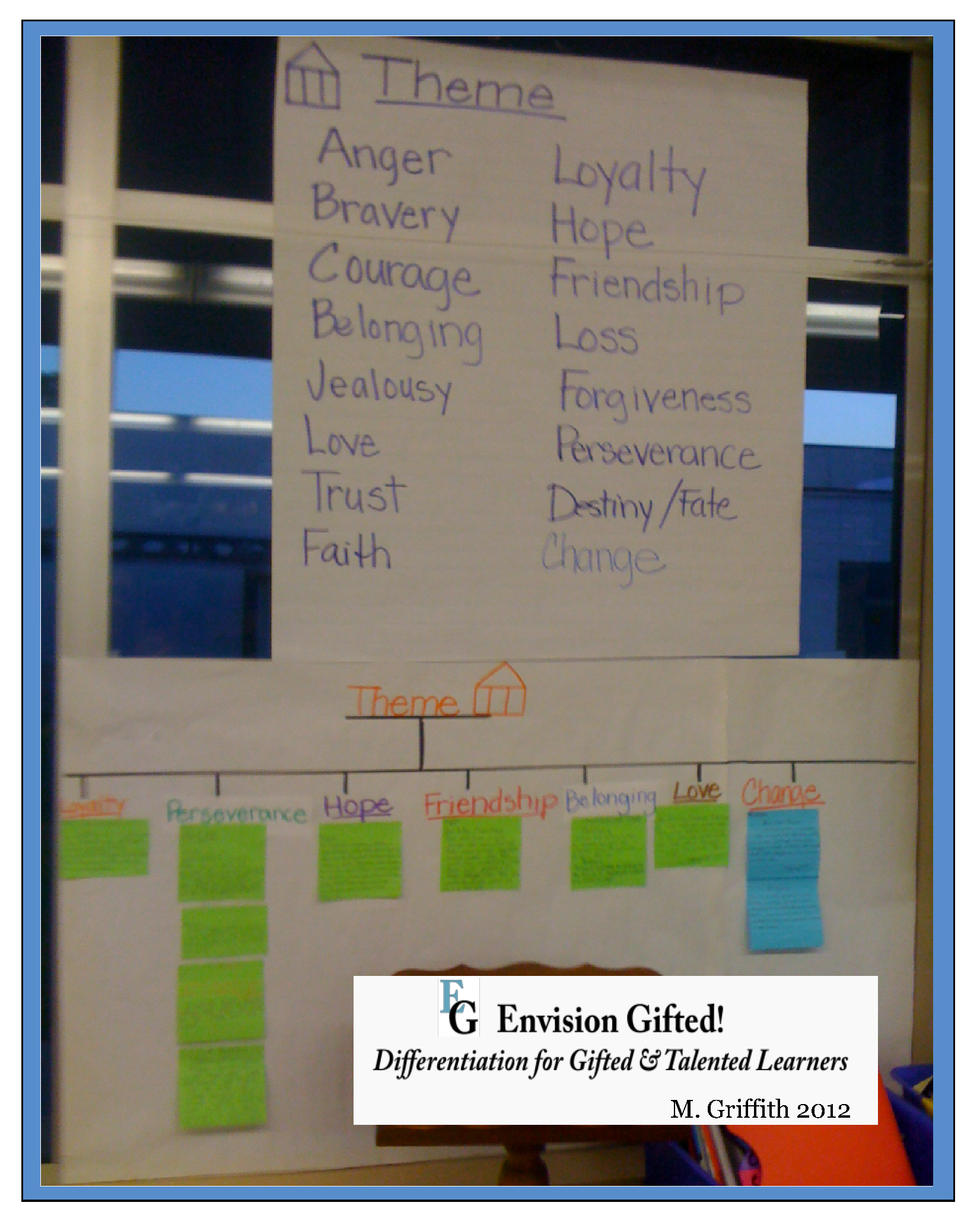 Identifying theme is complex and can be difficult for students.   It requires multiple scaffolds and support. I began by defining the term “Theme” and then we generated a list of common themes.  What was interesting was that after generating the list, students recognized the parallels between theme and character motivation (from an earlier lesson).

I moved the themes from the list to a Tree Map. We identified themes in stories (and movies) with which we were already familiar and placed them in the appropriate theme branch of the map. All of the examples had to be supported with evidence.

When starting, it is important to use stories where the theme is obvious.  Fables and fairy tales work really well. The Tree Map was left up and we continued to add to it throughout the year. When you have multiple stories for each category, you should notice some patterns emerge.  This was a really good scaffold for students who could refer to the chart later as they were asked to identify theme in the story they were reading. 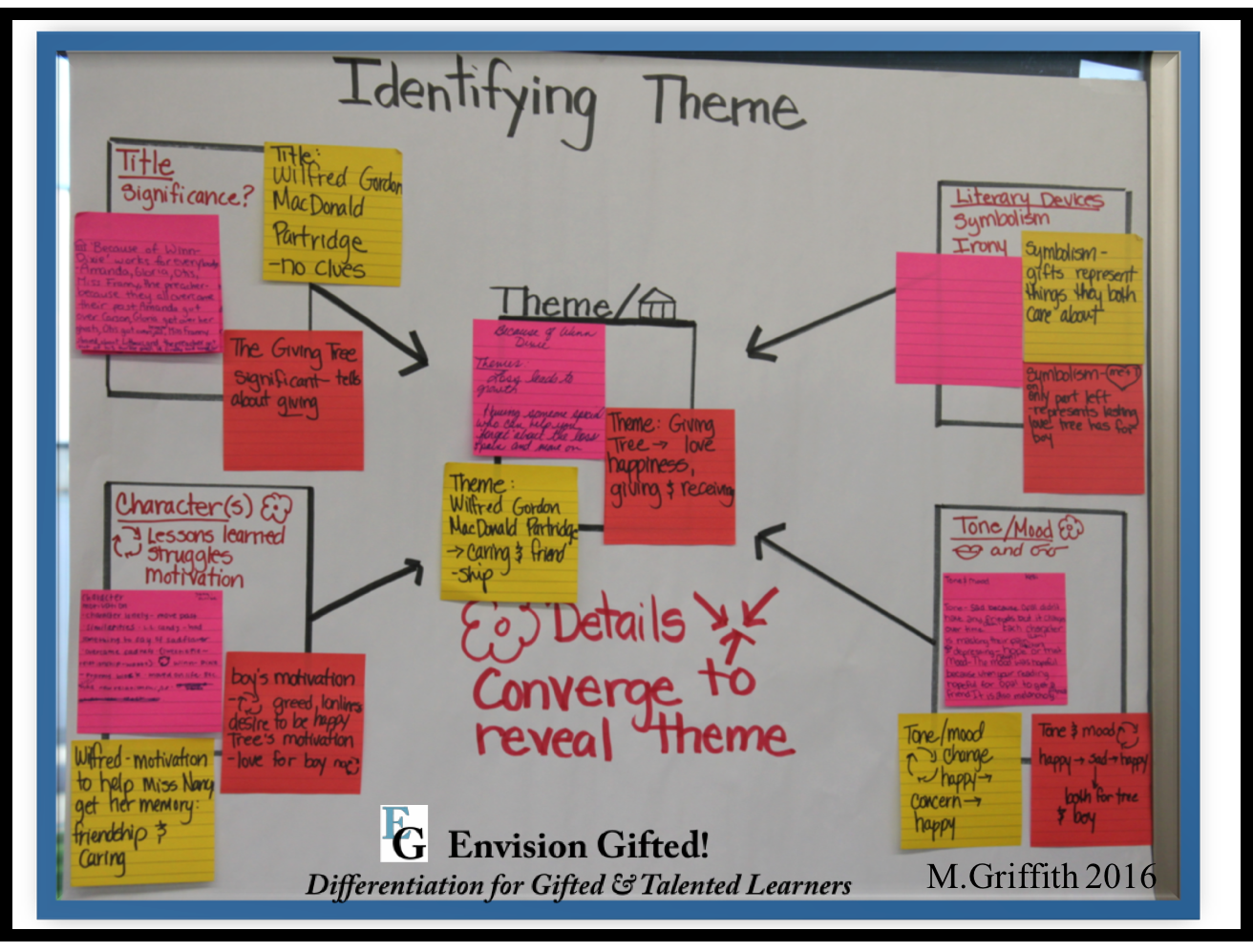 Our next step was to look at those stories whose theme was a little more elusive.  For this, we needed to decode the story  and identify the components that converge to reveal the theme.

Again, we started out with fairly easy stories- picture books like, Wilfred Gordon MacDonald Partridge work well.  We then went through one story at a time (color-coded) and looked for details in each category.

One component we examined was Title.  The title of a book caries a great deal of importance and often provides real insight into the theme.

We also looked at the characters in the story- How do they change?  What struggles do they face?  What motivates them?  What lesson(s) is learned?

We identified literary details such as symbolism and irony and also examined the tone and mood of the story.  Each of these reveal something about the theme.

This process seemed to help students not only identify theme, but also to be able to organize their thinking and evidence for proving theme.  This was a great served as a scaffold for students as they moved into written response.

Here you can see our next steps, as we applied this framework to Kate DiCamillo’s, Because of Winn Dixie.

Check out the images below for a zoom in of the different components. 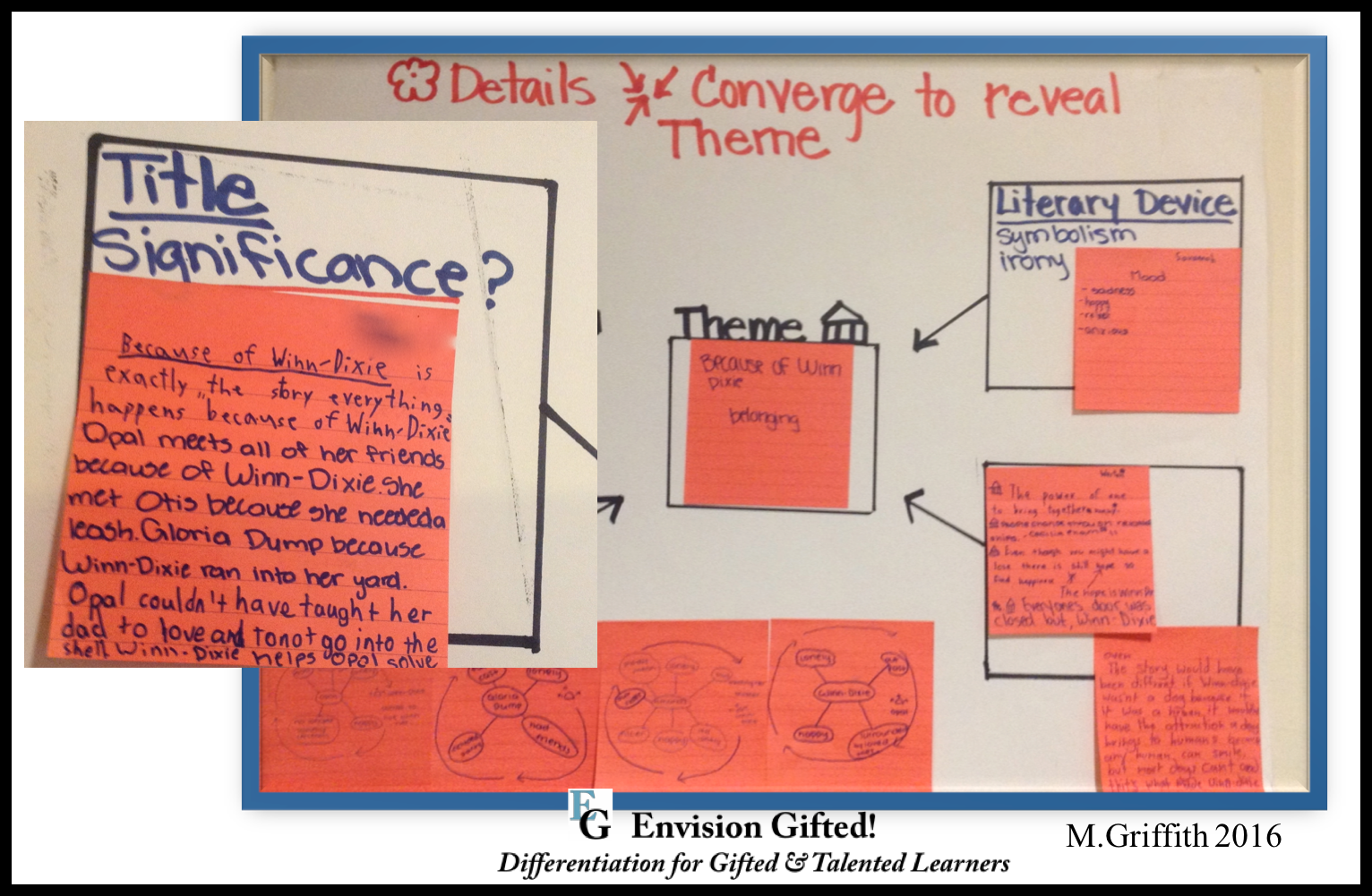 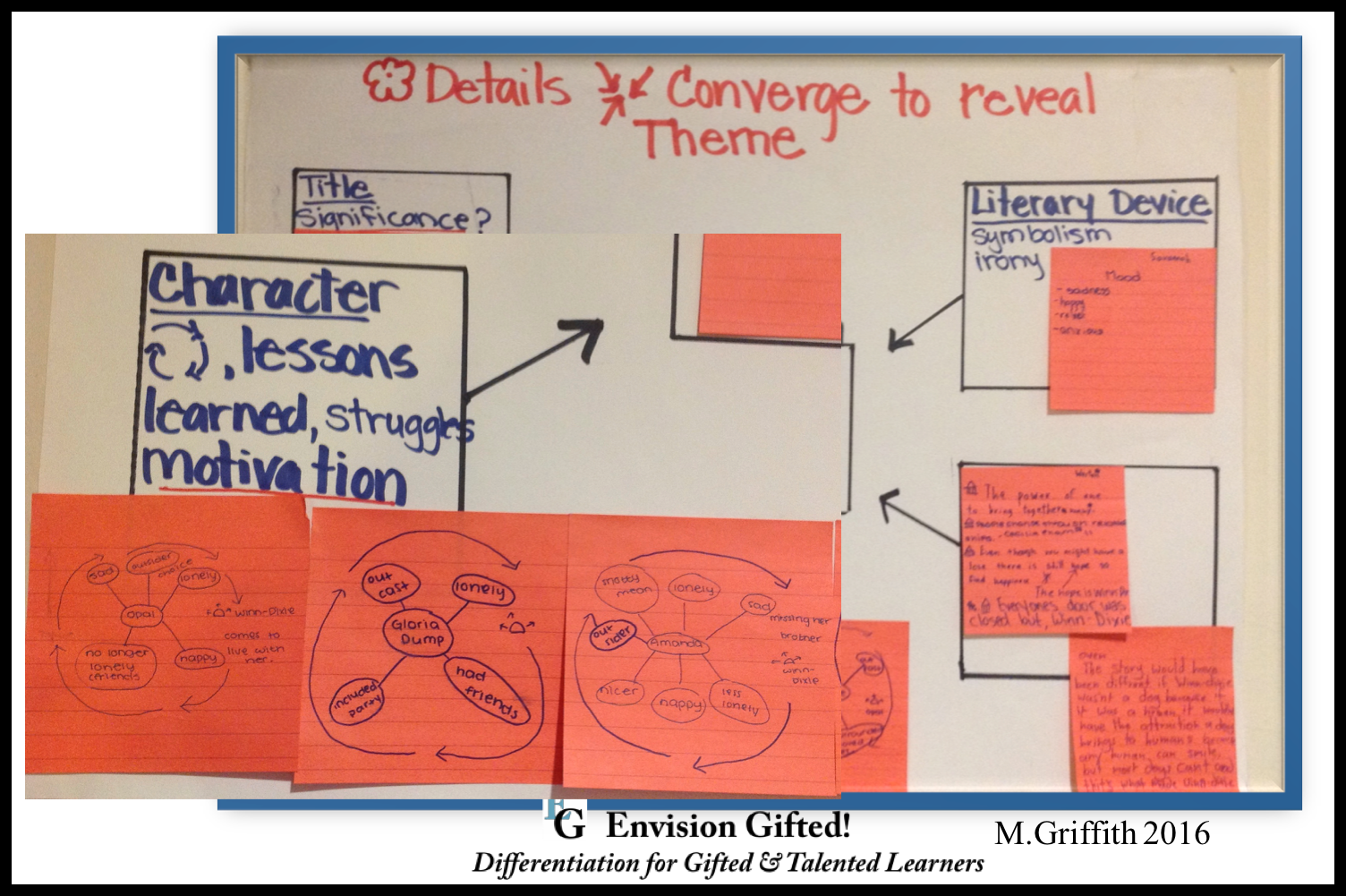 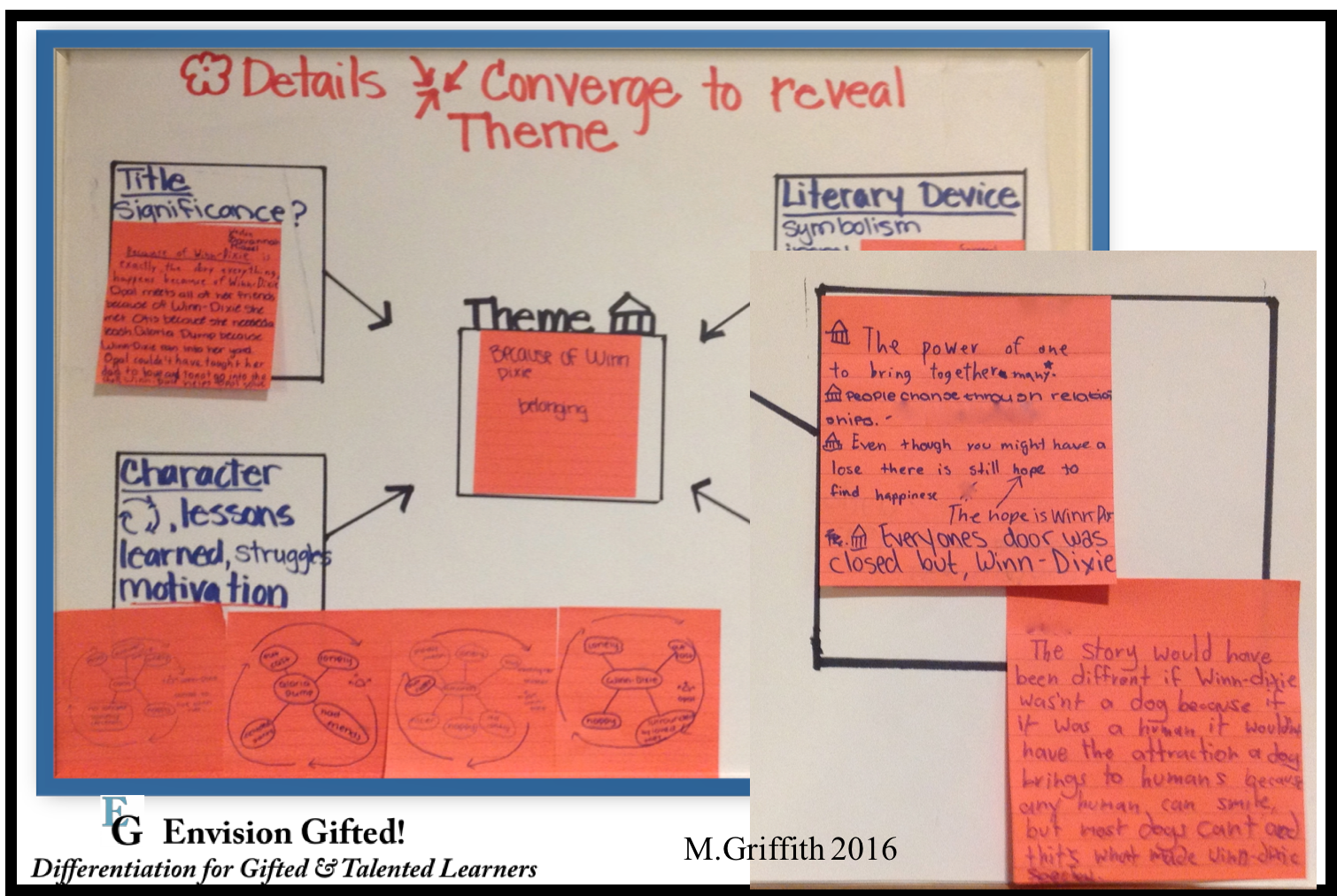